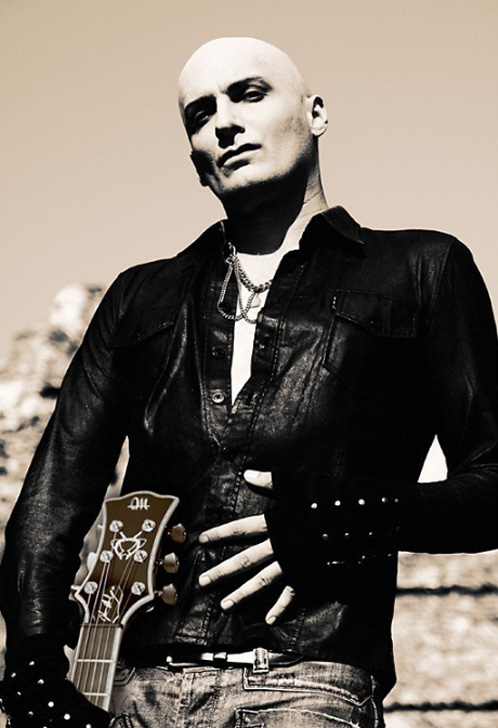 Sweet as wild honey and groaning like Sumerian cries they emerge from the clouds of the deepest slumber… Mayones presents the new Maestro signature series designed with cooperation of Johan Edlund – the leader of legendary TIAMAT. Contrasting Bible Black or Angel White finish adorned with the gleam of gold hardware, Maestro Johan Edlund Signature models reflect the character of the musician and his music.

TIAMAT is without doubt one of the most interesting metal bands of our times.

Formed in 1989 as a Death Metal band, the Swedes never cared about any genre conventions, making the first albums (“Sumerian Cry”, “The Astral Sleep” and “Clouds”) very inventive and special. TIAMAT included keyboards, choirs, clean guitars and haunting melodies, giving the music some Gothic approach. In 1994, the band released a very courageous album: “Wildhoney”. To this day, this record is a real classic with it’s own unique atmosphere.
After three years of silence and the parting with bassist and co-writer Johnny Hagel, TIAMAT mastermind Johan Edlund created his very own vision with the groundbreaking album “A Deeper Kind Of Slumber”. This record seemed like an up to date, modern version of PINK FLOYD including electronica, dub and trip hop, mixed with metal guitars and unique sound carpets. Some fans had their problems with this masterpiece, but they also had to admit that the album is sort of untouchable, because it’s so mature and intelligent, that it leaves you stunned.
1999s “Skeleton Skeletron” was again an outstanding album with a style that nobody could expect: Straight (Gothic)-Rock with majestic and epic songs. The sound was more reduced, not filled with electronica, but still experimental and for sure fascinating and exciting. “Judas Christ” was even more reduced and to the point, including some dark folk and NICK CAVE influences to the really heavy rock-costume of the record. “Prey”, released only one year later, took the style of “Judas Christ” even further and managed to include some old-school feeling to the songs, making it maybe their strongest record since “A Deeper Kind Of Slumber”.

After “Prey”, it became silent in the TIAMAT camp. But if you listen to “Amanethes”, the newest effort of the band, it becomes evident, that these five years were really worth the wait.
“Amanethes”, produced in Johan Edlund’s studio The Mansion, mixed in Woodhouse Studios by Siggi Bemm, is really interesting, because TIAMAT managed to bulid a colossus streaking the whole history of the Band. This album has it..s “Clouds”, enjoys “Wildhoney” and knows for sure “A Deeper Kind Of Slumber”, but at the same time, the songs can rock like on “Skeleton Skeletron” or “Judas Christ”. This album ist not a compromise, it..s the essence of TIAMAT – and it will for sure bring the band to another level and back in the minds of every metalhead!
Having in mind band’s achievements and class, we are proud to present the new, exclusive model – Maestro Johan Edlund Signature, build with the cooperation of Tiamat headmaster. The guitars are delivered in two contrasting Bible Black or Angel White finish adorned with the gleam of gold hardware, Coffin position markers and ‘Alien Head’ inlay on the headstock… Maestro Johan Edlund Signature models – created as a reflection of the character of the musician and his music…
“The day when UPS rang on my doorbell and delivered my two brand-new Mayones signature guitars, was easily one of the most exciting moments in my musical life.” – says Johan about the very first moment with his new babies – “Already familiar with Mayones guitars, I knew I could expect quality beyond perfection. Still, I was completely gobsmacked by their built and beauty.
I’ve got quite a nice guitar collection, but these two babies shine above them all. They play so well and they sound great. In Tiamat we use a lot of different sounds, from really distorted to clean and everything in between, and the Maestros deliver all the time.
It was very exciting to take part in designing these models, and I had very good contact with the company and was very impressed how much hard work was put in to every fine detail of guitarbuilding. Soon I’m gonna play them live for the first time, and for the first time ever you’ll see me treating a guitar with care. A side of me just wanna lock them up in a vault to make sure nothing happens to them. But of course Mayones understands what it means to be a hard touring musician, and supplied me with very good flightcases to protect the sexy ladies from evil airport handling. Thank you so much Mayones!”